The theater, built in 1904, has a rich history of hosting both avant-garde performances and classical music. Its unique aesthetic, with its crumbling brick and peeling paint, adds to the timelessness of its theater-in-the-round seating area.

Recently, the theater was the venue for a modern retelling of Henry James’ classic horror novella, The Turn of the Screw. The story, published in 1898, is a classic Victorian ghost story that plays on the public’s fears of death, mortality, and the afterlife. In the story, a governess is hired to take care of two children on a vast estate and becomes convinced that the house is haunted.

The 1961 film The Innocents revisited the concept for a post-war audience, but Strange Window: The Turn of the Screw by The Builders Association is a modern retelling that uses technology to create a macabre atmosphere for a millennial audience. The performance reinforces that the allegedly haunted BAM Harvey Theater is at the fore-front of modern theater.

As paranormal investigators, we were excited to experience this modern take on a classic ghost story and to see how technology could enhance the eerie atmosphere of the theater. We were also intrigued by the idea of investigating any spirits that may be lingering in the theater, which has a rich history and unique aesthetic. We look forward to sharing our findings with you in the future.

To begin the paranormal investigation of BAM Harvey Theater Alex, our resident tarot expert led us in a prayer for protection from evil spirits using Psalm 91, a poem from the Hebrew Bible. The poem imparts a sense of confidence and safety in the protection provided by God and is often referred to as the “anti-demonic” psalm.

Psalm 91 is a poem from the Hebrew Bible that imparts a sense of confidence and safety in the protection provided by God. It is often referred to as the “anti-demonic” psalm and is recited as a prayer for protection from evil spirits.

As Alex finished reciting Psalm 91, we noticed a change in the atmosphere of the room. The energy seemed to heighten, and we could sense a presence in the space. Some of us even felt a cold breeze on our skin. While the atmosphere was tense, we remained cautious and continued our investigation.

Jade, our psychic medium, was hesitant to revisit the BAM Harvey Theater grounds after sensing the spirit of a construction worker on our previous visit. However, during the investigation, she and another psychic identified two areas of spiritual significance. Jade sensed a spirit to the stage-right, while the guest psychic detected spiritual energy on the stage-left. This discovery added an element of intrigue to our investigation, and we were eager to explore these areas further. 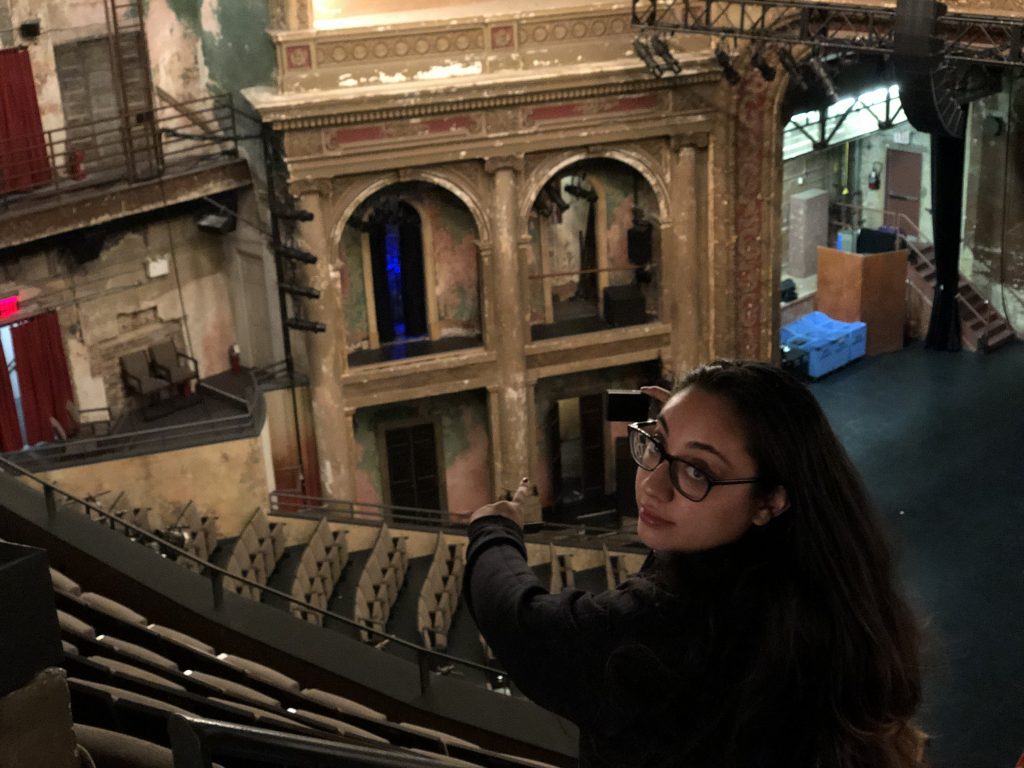 As we deliberated upon which path to take, we were informed of a crawl-space underneath us. Crawlspaces are often used in theaters for a variety of purposes. They can provide access to important mechanical and electrical systems, such as wiring, plumbing, and ventilation ducts. They can also be used to store equipment and props, and to provide space for performers to wait before and after their performances.

In some cases, crawlspaces may be used to create special effects, such as giving the appearance of a character emerging from underground. They’re mostly used at BAM Harvey Theater for storage, and moving around under the stage during performances.

The confined, eerie space sparked our curiosity, so we decided to make our way towards it.

As we investigated the stage-left area of BAM Harvey Theater, we discovered the ghost light. A ghost light is an electric light, typically near the stage, that is left on when the theater is unoccupied. While the ghost light provided energy, we did not detect any spiritual energy attached to it.

After examining the ghost light, the coven made their way to the stage-left balcony of BAM Harvey Theater for an impromptu visit. Here, we experienced an energetic exchange with a possible spirit who intelligently responded to our questions. The presence of this spirit added a layer of unease to our already eerie surroundings.

For our final investigative stop of the BAM Harvey Theater paranormal investigation, we ascended the spiral staircase to the stage-right balcony. Jade led the team to the location where she felt the spiritual energy was most dense.

As we reached the top of the spiral staircase, we could sense a flurry of activity. Jade, our psychic medium, was overwhelmed by the number of spirits that were trying to communicate with her at once. She struggled to keep up with their voices, which seemed to be coming from all directions.

We watched in amazement as Jade communicated with the spirits during the allegedly haunted BAM Harvey Theater paranormal investigation, asking them questions and listening to their responses. Some of the spirits were eager to share their stories, while others seemed more hesitant. It was clear that this was a powerful and emotional experience for Jade, and we could see the toll it was taking on her. Despite the challenges, she continued to communicate with the spirits, determined to learn as much as she could.

After Jade was psychically drained from communicating with the spirits at the top of the spiral staircase, we made our way back to the main stage area. We were all feeling a little shaken by the intensity of the experience, but we were also excited by what we had learned. As we discussed our findings and shared our experiences, we could feel the energy in the room shift. The spirits seemed to be calming down, and the atmosphere became more serene.

In our wrap-up, we caught the attention of the Archives Manager, Louie Fleck, who was pleased to share some fun facts about the theater with us. Louie also provided us with an immersive “behind the curtain” experience, giving a riveting presentation on the history of the theater and some of the most famous shows that have taken place on its stage.

We are grateful for the opportunity to investigate the BAM Harvey Theater, which was coordinated by Vilina Phan of BAM. During our trip to Flatbush, Vilina was knowledgeable and astute in highlighting the similarities between the characters in The Turn of the Screw and our BKPS Detectives.

As we look back on the paranormal investigation at the possibly haunted BAM Harvey Theater, we can’t help but feel a sense of discomfort. Perhaps the similarities between ourselves and the characters in the novella are too difficult to ignore. Will our debut in paranormal performance art haunt us forever? The answer remains to be seen.